The solution decided in #172 (closed) is not trivial to implement: to resolve closures before building the model, the model has to be built in the correct order, with components that depend on (contain references to) other components being instantiated first.

Since part of the solution in #172 (closed) is to remove the possibility to make self and cyclic references between elements, the kat script abstract syntax tree (AST) can now be represented as a directed acyclic graph. This has the property of at least one topological order that can be followed to allow the model elements to be built in a way that avoids unresolved dependencies. This MR introduces this ordering.

The use of an AST and topological ordering allows a slight reduction in the complexity of the current build step, since different types of closure are now no longer treated differently (previously analyses, model parameters and model parameter references were all treated slightly differently). However, this also makes it possible to specify functions and references as non-model parameters in init calls, which #130 (closed) originally fixed; however, I think if we want to fix this again we should do so by sanitising these values in init methods of each element rather than in the parser, since this is also a problem for the Python API.

Some slight changes in behaviour:

The AST is stored in KatYACC.ast and can be viewed with e.g. networkx.draw or (better) graphviz via networkx.drawing.nx_pydot.write_dot(parser.ast, "ast.dot") then dot -T pdf -O ast.dot.

Here is an example script and its AST: 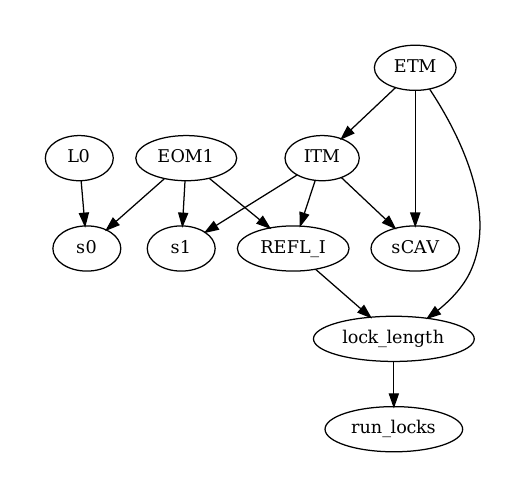 A topological order in this case would be:

(Another valid order would be top to bottom in the graphviz example above.)

As stated above, instructions with parameters that reference other parameters in the same statement ("self-reference" parameters) are not allowed any more. These can in principle be stated in a way that's perfectly valid (such as m m1 R=1-&m1.T T=0.01, in contrast to e.g. m m1 R=1-&m1.T T=1-&m1.R which would be impossible), but because the parser doesn't build Parameter objects itself and instead leaves this up to the relevant object constructor, it can't pass a resolved parameter self-reference to the constructor (simply, the Parameter can't be referenced if it doesn't exist yet).

It would take a lot of effort to allow this to work. We would first of all have to build Parameter objects in the parser rather than the constructor, which would break the principle of the constructor being the only place these parameters get made, which might lead to subtle bugs down the line if we do anything smart during parameter creation (for instance, I haven't thought whether this would work with the transparent mapping of single Rc values in the Surface constructor to separate Rcx and Rcy parameters).

Secondly, the parser would have to build an AST not just with instructions as nodes (as shown in the graph above), but with parameters as nodes too, with edges connecting parameters to their owning instructions. Parameters referencing other parameters would be connected by edges, and as long as the graph had a topological order it could be built in a way that everything could resolve (including parameters referencing others in the same element). And because parameters would have to in some cases get instantiated before their owning element, we would have to modify Parameter to not have an owner, or at least not rely on having an owner when it first gets made and instead have it set in a later step.

There are probably other challenges, such as how to give a globally unique identifier to references to parameters defined by position in a statement (I think this is solvable though, I had to solve that for the generator already), but it should be discussed whether this is worth it supposedly just be able to do m m1 R=1-&m1.T T=0.01 rather than m m1 T=0.01 L=0...

This will create a new commit in order to revert the existing changes.