Adds suspension thermal noise sub-budgets. This addresses 1/3 of #51 (closed). Suspension thermal noise can now be broken up into horizontal and vertical noise of each of the suspension stages. With one exception, which does not change the total noise, the calculation is the same as the current calculation but the contributions of each stage and direction are tracked separately.

In the current calculation the horizontal and vertical spring constants of each stage are broken up into an upper and lower joint and are stored separately. The total suspension thermal noise is then calculated by adding the contributions of each of these joints using the appropriate temperature of each joint. Instead of adding the contributions of each joint all at once, this MR makes it possible to track each stage with separate Noise classes and add them all to a sub-budget.

The imaginary part of the vertical spring constant is only attributed to the upper joint of each stage. The blade springs are the only contribution to the vertical spring constant for the upper stages while the lower stage also includes the continuum fibers or ribbons. It's unclear how to break this up into an upper and lower stage as is done in figure 14 of https://arxiv.org/abs/2001.11173, so this MR does not have vertical noise of the test mass. (The noise is included, it's just attributed entirely to the PUM.)

The sub-budgets are only implemented for the Cosmic Explorer interferometers since these are the only ones that have any other sub-budgets. The CE1 suspension thermal noise budget is shown below as an example. 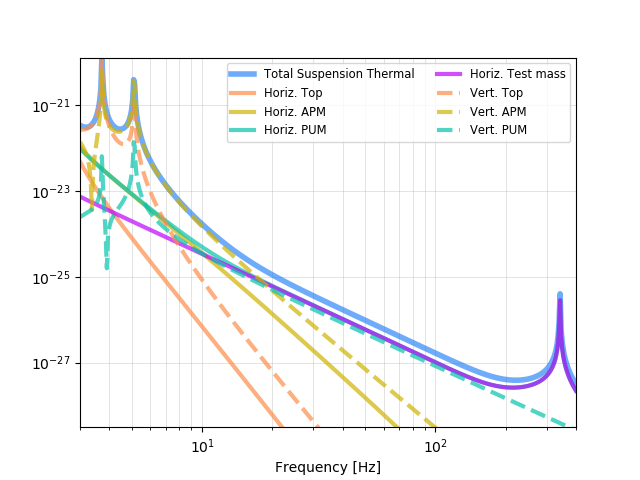